Blockchain and DLTs are disrupting all industries around the globe, and the videogame industry is no exception. Also called “Crypto Games” or “P2E Games”, these dapps are revolutionizing our concept of ownership of characters, accessories, or items inside video games, with the help of NFTs, DAOs, and DeFi. Whether mobile or PC, we’re sure that video games will bring millions of users to interact with a blockchain, especially the younger generations.

What is the “Play-to-Earn” model?

In traditional video games, players acquire a game created by a developer who owns the project in its entirety. The developers decide on all aspects of the application, leaving almost no room for the players to elect on the project’s future.  Revenue is made by selling a final product to the customers or offering a Free-to-Play model, where developers provide a premium game for free, and players buy skins, perks, and accessories from an in-game marketplace, making a profit in the process. When a player purchases a skin for a character in a traditional game like Fornite, the skin still belongs to Epic Games and not the player, even though you paid for it. The users cannot exchange it for another, lend it to a friend or resell it in the market. 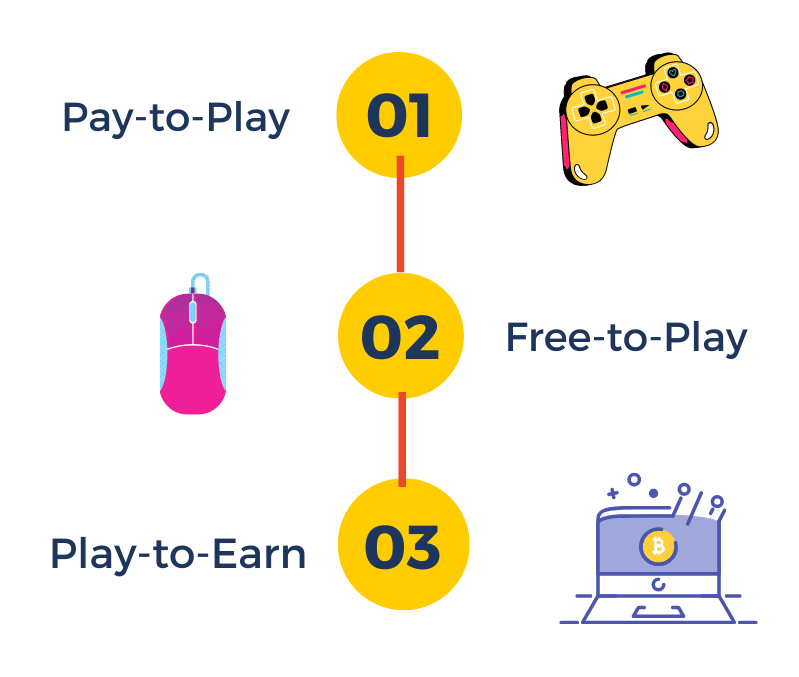 The Play-to-Earn model, also referred to as P2E, was successfully implemented by Sky Mavis, developers of Axie Infinity, the first P2E game to introduce this new reward mechanism for gamers triumphantly. Players receive SLP, Axie’s’ utility token when they win battles or fulfill daily quests. Later, users can claim these tokens and swap them for other crypto, stablecoins, or FIAT in third-party exchanges. This allows players to earn an income as tokens just for playing the video game; that’s where the name “play-to-earn” comes from.  This is a completely different model from a traditional gaming structure that rewards video games, publishers, and developers.

When a character, accessory, or item is acquired as an NFT within a P2E game, the player owns it entirely since it’s’ minted on a blockchain. P2E game users can sell their items in a third-party marketplace, rent them for a fee, or gift it to their friends. Users have complete freedom to decide what to do with the items they purchase, something genuinely innovative for an industry that generates more revenue than the movie industry and USA sports combined.

This new model allows players to be “owners” of the games they play, participating in the governance of the project as DAOs, owning tokenized products as NFTs, and participating in the redistribution of income generated by these platforms, something unimaginable in the traditional gaming industry. 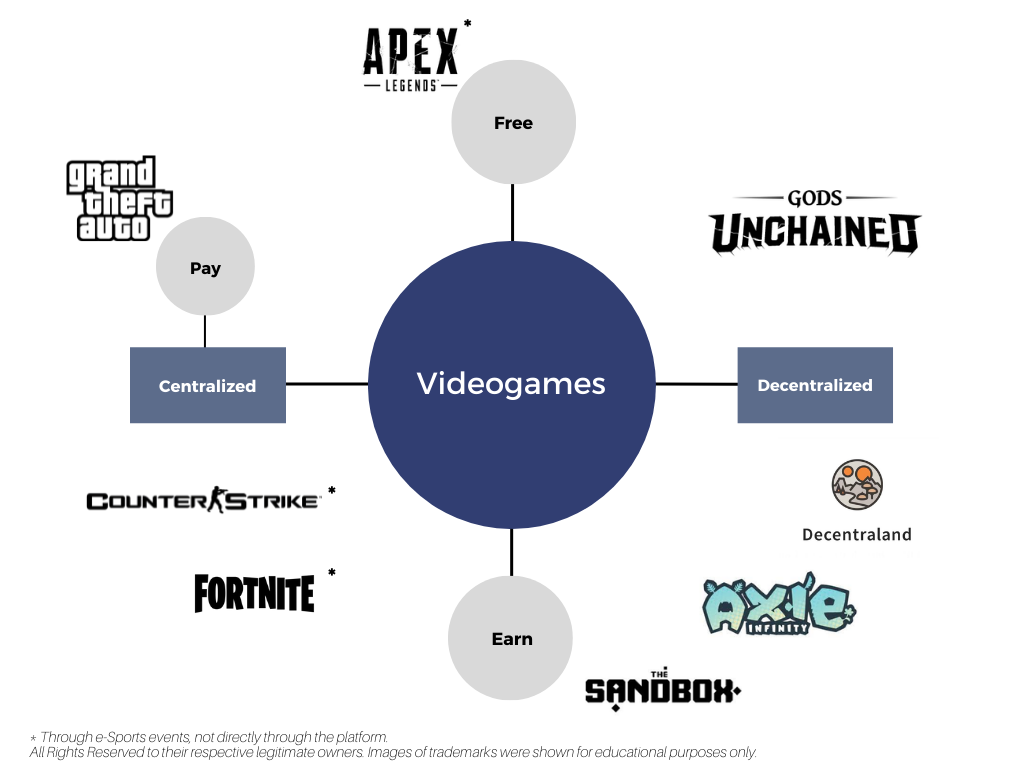 Speaking of Non-Fungible Tokens, NFTs are essential to the ecosystem of P2E Games since most of the characters, accessories, weapons, and in-game items used in these dapps are tokenized as NFTs. This allows players to handle their purchased items as they see fit, bridging them from one blockchain to another and conceding the holder with true ownership rights in these video games. Furthermore, in-game items in NFTs can be stored in personal crypto wallets (which are extremely secure) and allow individuals to trade them on the blockchain at their discretion. Smart contracts allow the trustless exchange of in-game NFTs for crypto between individuals that do not need to know one another. They just have to meet the conditions of a smart contract that automatically executes transactions.

Most of these P2E games adopt a DAO as a governance structure, as mentioned earlier, allowing players to be part of the project and giving them a vote in the governance and future endeavors of the organization. Projects like Illuvium and Splinterlands showcase this. Both have issued governance tokens for their DAOs to allow users to participate and decide in their games’ upcoming changes and updates.

How Are Assets Acquired?

There are different ways of acquiring crypto-assets within blockchain games. The most obvious and common way to achieve these assets is simply playing the game. It is likely that you have to meet certain objectives, or need to reach a certain level, or even have to invest in some assets to play. Still, the distribution of tokens and NFTs through the video game’s gameplay is fundamental because it creates engagement with the players and determines the long-term viability of tokenomics.

Another innovative but more risky way to acquire these assets is through pre-sales of tokens, and NFTs carried out by developers to raise funds for their projects. These types of operations are similar to ICOs, so they carry the risks associated with them, where you could be investing in an unviable project, or one without a good team to develop it, so we must be cautious when we participate in pre-sales of this type of crypto-assets.

And last but not least: Giveaways and Airdrops. They’re considered marketing campaigns created to promote a project, and they do this by distributing NFTs and tokens for the first or most active users of their product.

In some cases, the income generated from blockchain games could exceed the minimum wage in some countries, as is the case for Axie Infinity players in the Philippines or Venezuela, which has led some tax authorities to give their opinion about this topic.

An author from the Philippines made a comparison divided by regions of earning an income through playing Axie Infinity versus working for a minimum daily wage in a traditional industry, and how much could a person earn by working 4 hours versus playing 4 hours. The results speak for themselves. No wonder the Philippine government has already approached this matter, as we’ll address later since it affects the workforce and tax enforcement. 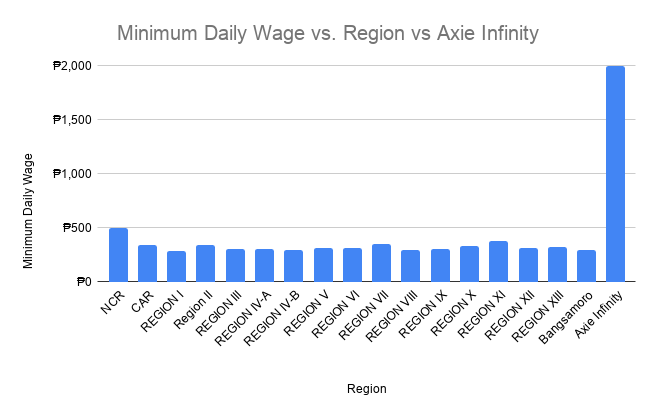 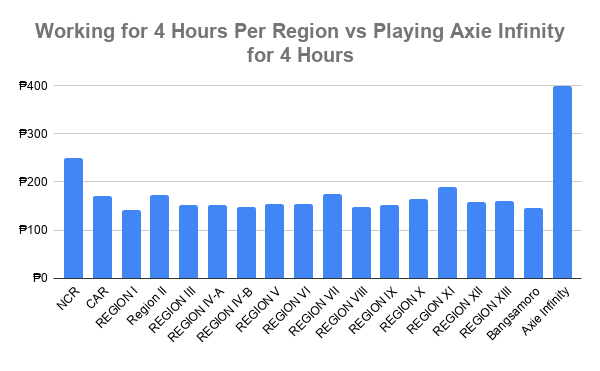 As you can see, the difference above between working a regular job for a minimum wage vs. playing a P2E game in the different regions of the Philippines is abysmal. We’re not encouraging anyone to quit their jobs and start playing P2E games as a sustainable way to live by showing you this data. Still, it has helped many families, especially during the lockdowns for the pandemic.

Regarding income tax regulations, we must remember that every country has a different revenue threshold to tax income. In the case of a minimum wage worker, most governments don’t apply an income tax because workers cannot reach the minimum income bracket. Still, if an employee starts receiving additional revenue from playing a P2E game, they might reach a tax category and get taxed for these revenues.

Around August of this year, the Bureau of Internal Revenue (BIR) of the Philippines issued the circular RMC No. 97-2021, which addresses income taxation generated through online platforms. Even though it was addressed to influencers of traditional social networks, this publication led many to believe it directly attacked the revenues produced in new digital economies, including blockchain games. Players should understand that they’re receiving an income in the form of tokens as many governments will want a piece of that pie, so keep an eye on your annual income. If it surpasses the minimum income tax bracket, declare those profits of the competent tax authority.

It is necessary to point out that recently the FATF published the “Updated Guidance for a Risk-Based Approach for Virtual Assets and Virtual Asset Service Providers (VASP),” where the latest recommendations made by the regulatory body regarding digital assets were established. One of these proposals is related to the crypto service providers, like exchanges and dapps developers, requesting VASP to collect personal information about the users of the protocols and comply with KYC/AML policies regarding the identification of beneficiaries; a measure that could stall the development of more dapps. Suppose blockchain games mint and distribute utility tokens as rewards for players. In that case, this rule will apply to them because utility tokens are treated as Virtual Assets but for NFTs, this rule doesn’t apply since they’re not considered VA under the FATF rule.

As crypto games become a new financial vehicle with the capacity to generate revenues capable of supporting families in several underdeveloped countries, most governments will have to tackle this subject and provide clear instructions for their citizens to comply, like the travel rule applied to crypto, as more and more users pile up to try this new economic model.

Even though we’ve only seen small studios and indie video games developers create crypto games, the good news is that more AAA developers are keener to use a blockchain for their future projects, as a recent study shows that 58% of video games studios are already exploring blockchain and how to incorporate NFTs for their title, with big names like Ubisoft and EA already working to bring this technology for their upcoming games. This document was created by
IVAR CIFRÉ
Team